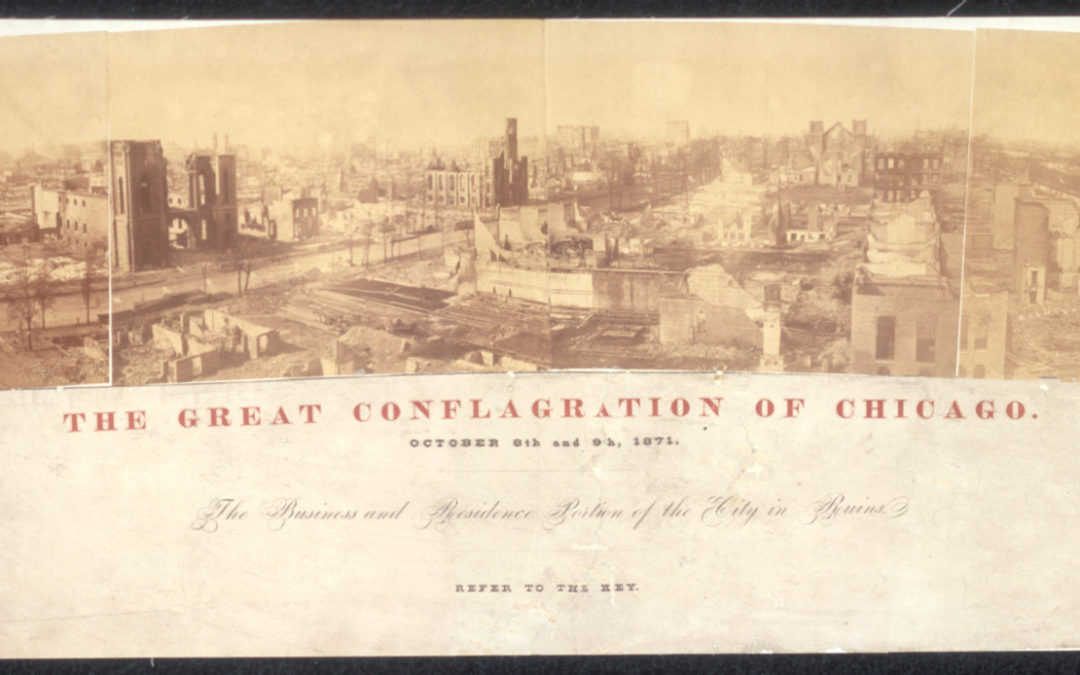 As I write this, best estimates put the worldwide death toll for COVID-19 at a little over 930,000 people worldwide. At this point, one can only guess at the economic damage. Some of us have lost loved ones or property. This has been a devastating year for many of us. Dwight Moody also faced tremendous tragedies. He lived through the carnage of the American Civil War. Then shortly thereafter, in 1871, he faced another tragedy, the Chicago fire. The fire was one of the greatest urban tragedies of the nineteenth century. It was also a crucial turning point in the life of Dwight Moody.

The fire began on October the 8th and would burn until the 10th. When it was over, three and a half square miles of the city were gone. About 100,000 people, almost a third of the city, were left homeless. Fifty churches and missions as well as eighteen thousand buildings were reduced to a smoldering pile of ashes. This tragedy would reveal Moody’s faith as well as shape his future ministry. As we face the trauma of a national pandemic, there are lesson for us to learn from Mr. Moody’s experience.

The material cost of the fire to Mr. Moody was severe. His own home was destroyed. One of the few things saved was a portrait of Mr. Moody that his wife grabbed as they fled the house (it hangs today in his birth home in Northfield). Upon returning to his house after the fire, the only thing Moody recovered was a toy stove of his daughters. Two of Moody’s places of ministry—the YMCA and the church building that housed the Sunday School—were smoldering hulks. All that was left was the congregation we today refer to as Moody Church.

However, Moody immediately concerned himself with the needs of others. Working in connection with the Sunday School and Moody Church, he had a large structure erected to provide temporary shelter for displaced people. Moody raised the funds for the building and helped recruit the staff for the enterprise. Food was prepared and served daily. Ever the evangelist, Moody made sure all who came heard the Gospel. He also provided spiritual encouragement and instruction for those who were already believers. (1)

Some of us have lost a great many material things during this time. It is painful. What we see in Mr. Moody is a heart for others. In his own loss, Moody gave of himself to relieve the loss of others. Jesus calls us to follow Him, to copy Him. He gave His life so that we may live. Let us pray that God would give us the same grace he gave Moody, to serve others even in the midst of his own loss.

The effects of the fire went well beyond the loss of property for Moody. It left a spiritual scar as well. The night the fire broke out, Moody was preaching to an audience of about 2500. He spoke on Pilate from Matthew 27:22, “What then shall I do with Jesus which is called the Christ?” Moody ended the meeting by challenging the audience to take the week to weigh the claims of Christ. He promised to return the following week to challenge them to commit to Christ. The meeting ended with a hymn during which many noticed the sounds of fire engines. (2)

Moody would later describe the one-week challenge in this meeting as one of the biggest mistakes of his life. He often wondered how many of those 2,500 people died that night or the next day in the fire. He later said, “I want to tell you of the one lesson I learned that night: … that is, when I preach, I press Christ upon the people then and there and try to bring them to a decision on the spot. I would rather have that right hand cut off than to give an audience now a week to decide what to do with Jesus.” (3)

Spiritually, the fire gave focus and urgency to Moody. One of his later sermons reflected this commitment: “Concentrate your life upon some one thing and it will cut a channel so deep that your influence will be felt.” (4) Too often we live as “jack of all trades and master of none.” This experience caused Moody to focus on his gifting and calling. Moody became a man focused on his calling to evangelism. This focus allowed his life to cut deep. The quote from Moody still rings true. Find your gifting and your calling. It maybe something insignificant in the eyes of humans, but God sees it as important. Serve him faithfully and let your life cut deep.

Not only did Moody become focused but there was a new urgency in his service to Christ. Moody learned tomorrow is not guaranteed, either for him or those around him. Many of us think we will get around to serving God tomorrow. This pandemic is a clear reminder to us our lives are very fragile. Do not leave for tomorrow what the Lord wants you to do today; tomorrow is not guaranteed.

Tragedy of various kinds are woven deep into human life. Mr. Moody’s life was no different than ours. Let us pray we will serve the Lord faithfully and become better servants of Him as we travel through this together.

GREG QUIGGLE is the D.L. Moody professor of Historical Theology at the Moody Bible Institute in Chicago. He holds a PhD from the Open University in the United Kingdom, an MA in Historical Theology from Marquette University, an MA in Church History from Wheaton College, and a BA in Psychology from Wheaton College. He has lectured and written on Dwight Moody and the history of Moody Bible Institute.