Billy Graham and D.L. Moody: Obedience to the call of God 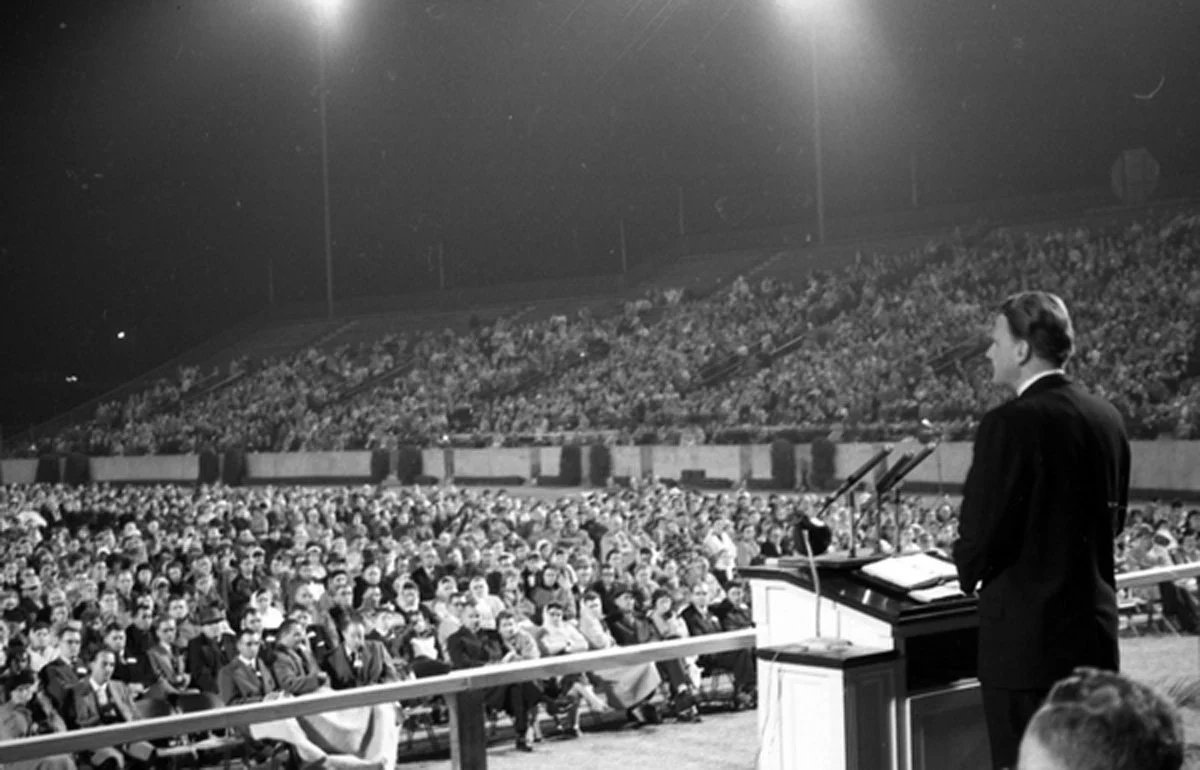 In the office of Dave Powell, D.L. Moody’s great-grandson, there are a number of documents and pictures in the process of being archived. While flipping through the binders, you might come across a particularly interesting letter written to Dwight’s daughter Emma Moody from none other than Billy Graham. The letter tells of his affection for D.L. Moody and of the great influence Moody had on Graham’s own life and ministry. But one line stands out from the rest:

“I am wondering if you all are really aware of the many movements that now exist throughout the world that flowed from the ministry of Dwight Moody.”

Dwight L. Moody influenced many to join the cause of evangelism, but perhaps the most well-known individual to have identified Moody’s deep impression on his life is Billy Graham. Born in 1918, William Franklin Graham was raised on a farm outside Charlotte, North Carolina. On his sixteenth birthday, Graham accepted Christ at a Mordecai Ham revival styled after the evangelistic meetings of D.L. Moody. After graduating from Florida Bible College and Wheaton College, Graham served briefly as a pastor before becoming a full-time staff member of Youth for Christ.

Youth for Christ gave Graham the opportunity to share the gospel with thousands at public events both in the United States and Europe. After holding a series of successful evangelistic meetings in Los Angeles, London, and New York in the 1940s and 50s, Graham’s reputation as a successful evangelist spread rapidly. Thanks to advancements such as radio, television, and air travel, Graham was able to spread the good news of Jesus Christ to an extent unheard of in Moody’s day. But how did Moody, who died almost twenty years before Graham was born, have such a profound influence on Graham’s ministry and evangelism?

Viewing Billy Graham as a twentieth-century equivalent of D.L. Moody ignores the uniqueness of each evangelist. Graham had a more extensive education than Moody, and he entered full-time ministry earlier in life. Where Moody’s preaching was powerfully simple and conversational, Graham’s was animated and full of vigor. Graham is noted for starting two periodicals and publishing over 30 books in his lifetime, while Moody left a distinct mark in the schools he founded.

“It turned out that the independence and non-denominational character of the parachurch gave evangelicals a tremendous advantage. They could bypass denominational leadership and go directly to the people with a simple, vibrant evangelicalism that transcended denominational differences. Billy Graham would exploit this advantage better than anyone before or since.”[1]

In that sense, Graham revived Moody’s vision for what evangelism could look like and adapted it to his own time. As Michael Hamilton notes,

“Critics were sure that Graham’s crusades were an anachronism, the death-rattle of the bad old days of American Christianity.  But they failed to see that mass-meeting revivalism was only the building’s façade.  Behind that façade stood an impressive superstructure—Moody’s synthesis of traditional evangelical beliefs, fresh ideas, and new institutional forms. The fundamentalist-modernist controversies had only temporarily halted construction of Moody’s project.  Now the laborers were back on the job, and the most important of them would prove to be Billy Graham.”[2]

Obedience to the call of God

What must not be forgotten about D.L. Moody and Billy Graham is that behind their unprecedented reach and household-name status, both were men who answered the call of God to go and preach the good news of salvation in Jesus Christ. Each was a brilliant innovator and skilled orator in his own unique way, but they both used their gifts first and foremost to seek the salvation of the lost. Graham understood what Moody understood: The measure of a man would never be found in his own talents or abilities, but in yielding to the Holy Spirit, following God, and living a life of humble obedience. This obedience to the call of God ties Graham to Moody more than anything else.

Billy Graham’s endeavors could appropriately be included in the “many movements” flowing from Moody’s ministry that he originally mentioned in that letter to Emma. Decades of Graham’s evangelistic crusades and meetings have left a legacy for a new generation. Ultimately, the life of each man is a testament to the power of God to work His purposes through individuals who submit to Him. Billy Graham, like D.L. Moody, understood that he would never accomplish God’s work without God’s power.  As Michael Long writes, “Ask Billy Graham how he has done all that he has done, and he answers, ‘God.’”[3]