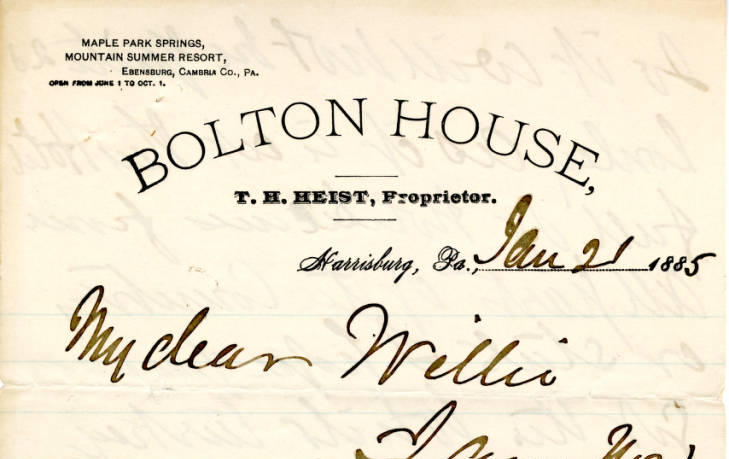 When we think of Mr. Moody, some of us immediately picture him preaching the gospel to thousands in a jammed auditorium. Others may see him working among the wounded during the Civil War. Some may conjure up in their minds the young Moody surrounded by children in his Sunday School. Many will think of him riding in a horse drawn cart among the buildings of his schools in the rolling hills of Northfield. For some Moody is framed by the bustling masses of Chicago with its great stockyards and factories. Still others think of Moody in his role in forming Christian publishing.

While these are all accurate and catch a sense of the man, it is easy to forget Mr. Moody was a father. In all, Moody and his wife would have three children: Emma, William, and Paul. The archives at Moody center contain numerous letters to his children. In them, we see Mr. Moody’s heart for his children as well as his hopes and fears.

In 1885, Moody wrote to his son William. The letter illustrates Moody as a father. It is written from Harrisburg, Pennsylvania, as he is traveling. He asks about things around their home. He describes sights from the Civil War, and what he hopes to share with his son when he gets home. He also talks of loneliness and even being homesick. But towards the end, the letter takes a turn. It is almost as if Moody feels compelled to share his hopes for his son.

Mr. Moody asks William if he likes his new Sunday School teacher, and then proceeds to share the dreams he has for William. Here we see Mr. Moody’s heart. He writes;

I hope you will grow up to love the Bible. . . I would like to say of you as Paul did of Timothy that from your youth you have known the scripture for it is able to make you wise. . .

God bless you & keep you from sin

in the prayer of your loving Father

Dwight Moody’s deepest desire for his son was not financial success or fame. It was not that he live a long, healthy life with a large, happy family, but that he be a man of the scriptures.

I read this letter as a father. Many of you who read this have children. We have hopes and dreams for our children. Mr. Moody’s letter was a challenge to me. What would I like to say about my children some day? What do I pray for them? Let us all pray that our sons and daughters would grow to be mighty in the scriptures.

GREG QUIGGLE is the D.L. Moody professor of Historical Theology at the Moody Bible Institute in Chicago. He holds a PhD from the Open University in the United Kingdom, an MA in Historical Theology from Marquette University, an MA in Church History from Wheaton College, and a BA in Psychology from Wheaton College. He has lectured and written on Dwight Moody and the history of Moody Bible Institute.