In the darkest night- words from D.L. Moody for tragedy 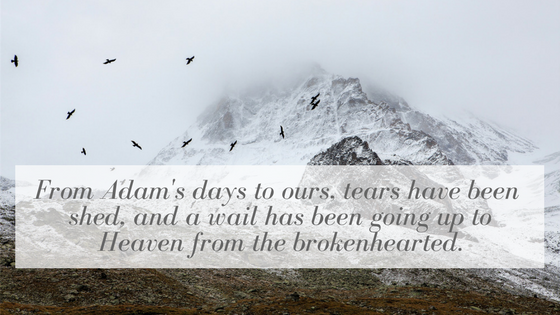 In light of the events at Las Vegas, our hearts ache. We know that all creation cries out and longs for the day of redemption, but this is one of those times that makes that deep burden even more real and intense. Friends, let us draw together and come to the Great Physician.

D.L. Moody shared a powerful illustration about these dark times of trial to point us towards our hope:

I suppose while I am talking, you are thinking of the great sorrow in your own bosom. I do not know anything about you, but if I came round to every one of you, and you were to tell me the truth, I would hear a tale of sorrow. The very last man I spoke to last night was a young mercantile man, who told me his load of sorrow had been so great, that many times during the last few weeks he had gone down to the lake and had been tempted to plunge in and end his existence. His burden seemed too much for him. Think of the broken hearts in Chicago tonight! They could be numbered by hundreds – yea, by thousands. All over this city are broken hearts. If all the sorrow represented in this great city was written in a book, this building couldn’t hold that book, and you couldn’t read it in a long life time.

This earth is not a stranger to tears, neither is the present the only time when they could be found in abundance. From Adam’s days to ours, tears have been shed, and a wail has been going up to Heaven from the brokenhearted. And I say it again, it is a mystery to me how all those broken hearts can keep away from Him who has come to heal them. For six thousand years, that cry of sorrow has been going up to God.

We find the tears of Jacob put on record, when he was told that his own son was no more. His sons and daughters tried to give him comfort, but he refused to be comforted. We are also told of the tears of King David. I can see him, as the messenger brings the news of the death of his son, exclaiming in anguish, “O, Absalom, my son, would that I had died for thee!”

And when Christ came into the world the first sound He heard was woe – the wail of those mothers in Bethlehem; and from the manger to the Cross, He was surrounded with sorrow. We are told that He often looked up to Heaven and sighed. I believe it was because there was so much suffering around Him. It was on His right hand and on His left – everywhere on earth; and the thought that He had come to relieve the people of the earth of their burdens, and so few would accept Him, made Him sorrowful. He came for that purpose.

Let the hundreds of thousands just cast their burdens on Him. He has come to bear them, as well as our sins. He will bear our griefs and carry our sorrows. There is not a burdened son of Adam in Chicago who cannot but be freed if he will only come to Him.”

To read the full text of D.L. Moody’s sermon “To the Afflicted”, you can download it at www.themoodycenter.org/resources