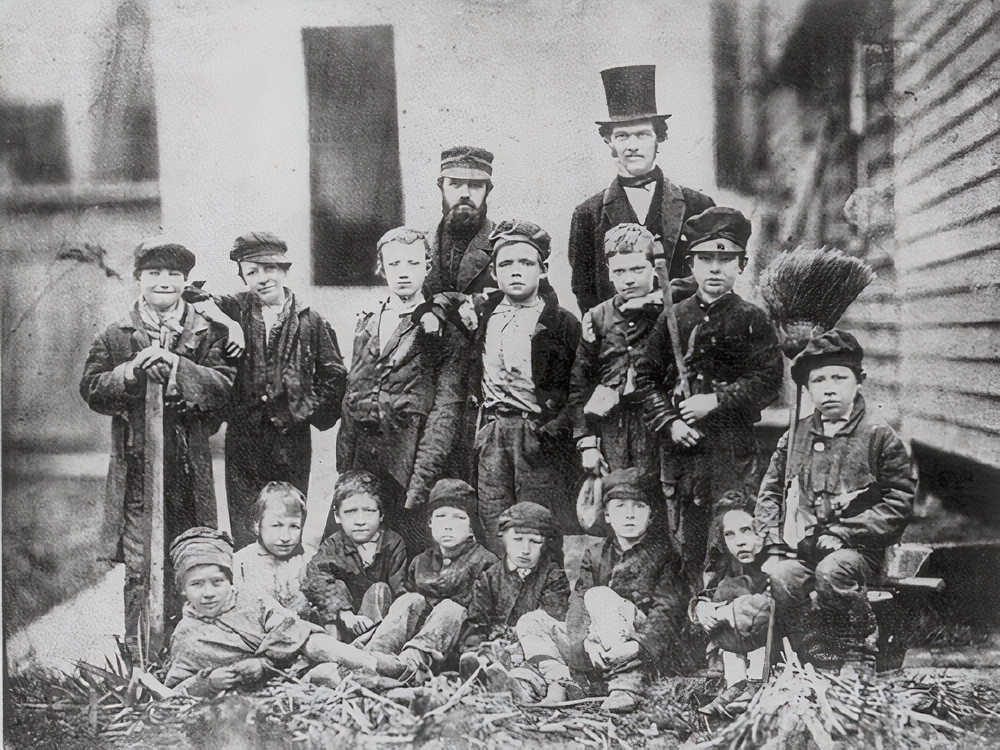 The story of how God worked through humble men, a time of pandemic quarantine, and a small booklet of colors to reach generations of children with the Gospel.

When D.L. Moody first stepped foot into the bustling city of Chicago in 1856, his plan was to pursue business. A self-motivated and persistent young man, he found work in a shoe store and before long had gained a reputation as an effective salesman. There is no doubt that Moody’s determination and winsome personality could have led him to a prosperous business career, but God was drawing him in a different direction.

Before moving to Chicago, Moody became a Christian while working at his uncle’s shoe store in Boston. While he didn’t give up his business ambitions altogether, Moody began to devote more time to ministry and service. At the Plymouth Congregational Church, Moody invited people to attend services, participated in prayer meetings, and recruited boys and girls for the Sunday school. He also spent a significant amount of time volunteering at the YMCA. Moody’s involvement in ministry grew steadily, and in 1858 he began his own Sunday school in a poor neighborhood north of downtown. The first class consisted of 18 children Moody invited off the street.

As the Sunday school grew, Moody faced a dilemma—he felt a strong desire to reach the poor and lost of Chicago with the gospel, but business commitments still demanded his attention. After some deliberation, Moody decided to give up business entirely in order to serve his Lord most effectively. By 1861, Moody had left the business world and devoted himself wholeheartedly to ministry.

The name of D.L. Moody often invokes images of a powerful orator facing huge crowds at revival meetings, but Moody’s evangelistic efforts began at the lowest levels of society. His Sunday schools were populated by poor, uneducated, homeless children, a group often forgotten amid the vastness of Chicago. He began in a deserted building in a crime-ridden neighborhood with no curriculum except the New Testament, so he adopted the use of an illustration begun by Charles Spurgeon. The illustration was a short booklet with three colors—dark, red, and clean—used to explain sin, Jesus, and salvation to children. Moody then added a gold (or yellow) page to help children learn more about God’s character, His great love for them, and His desire to be their friend both on earth and for all eternity in Heaven.

As J. Wilbur Chapman observed, “It is doubtful if, in these humble beginnings of his efforts, he had any realization of the great work that lay in store for him. He simply saw men and children sinking in the moral lazaretto of a great city and stretched out his hand to help them.”

And help them he did, despite lacking experience, education, and resources. Moody’s humble service and diligence were the result of sincere faith in God, not faith in his own abilities and efforts. God blessed the work of D.L. Moody. Years later, this is what caught the attention of a struggling Christian named Jesse Overholtzer.

Too young for the gospel?

Jesse Irvin Overholtzer was born and raised in a Christian family but struggled regarding his own faith. At age twelve he had expressed interest in personally receiving the Gospel, but he was sadly told that he was too young. Overholtzer practiced his faith during his college years, but battles with temptation and doubt later overcame him, as he recounts in his book Salvation by Grace:

“Soon temptation came and sometimes I yielded, never deliberately, but through weakness and not knowing how to obtain victory. These sins I confessed to God and sought His forgiveness, but gradually Satan tempted me to question whether a sinning Christian was still saved. I began doubting my salvation, for I was now looking to my conduct instead of to the merits of Christ.”

Doubts about his salvation plagued Overholtzer for years. The initial joy of salvation diminished as his gaze drifted off the cross of Jesus Christ and onto his own obedience and good works. To his frustration, he saw his pastoral ministry and Christian witness begin to suffer, so he worked even harder to obey God and flee temptation. Overholtzer knew that something vital was missing, but what it was he could not tell.

Several events slowly began to penetrate the darkness of Overholtzer’s despair and bring him to a renewed understanding of salvation. The first of these was the life of D.L. Moody. Having come across an old biography of the evangelist, Overholtzer read it and was at first unsettled. How was this imperfect man, with only a sixth-grade education, used so powerfully by God? How was he so successful? In Overholtzer’s own words, “I saw that [Moody] had something which I did not have—the Holy Spirit’s presence and blessing his life and ministry.”

This encounter with the life of Moody, together with the faithful witness of others, began to soften Overholtzer’s heart. An insatiable desire to seek the truth and find what was missing in his own life and ministry drove him to God’s Word. When Overholtzer’s family was quarantined for scarlet fever, he found he had plenty of time for vigorous Bible study. It was during this period of seeking truth that the Holy Spirit opened his eyes to the sufficiency of grace. He saw that it was Christ’s righteousness, not his own, that made him right before God.

Trusting in Christ alone, Overholtzer found a joy and peace he had not felt for years. While he had been a pastor for much of his adult life, now he felt God’s blessing on his preaching and evangelism in a greater way than ever before: “I now had a Gospel—Good News—to preach. I now had a testimony to give.”

The gospel … for children

Years later, Overholtzer read a quote of Charles Spurgeon in which the pastor stated his belief that even children as young as five were able to come to faith in Christ. Struck by these words and remembering how he had been turned away at age twelve, Overholtzer conducted his own experiments and saw proof that children indeed could come to saving faith and even lead others to Christ.

Overholtzer went to Chicago to solicit the help of Moody Bible Institute in the founding of a new ministry to children. The president of MBI appointed a staff member to the board of the newly forming Child Evangelism Fellowship®. Overholtzer became affectionately known as “Mr. O” as he reached children with the joyful truth of the gospel. He knew the beautiful simplicity of child-like faith. One summer, he led 5,000 children on the streets of Chicago to faith in Jesus using the Wordless Book. He added the green cover to the Wordless Book and taught children how to grow in their faith. Since its founding in 1937, CEF has reached hundreds of millions of children around the world with the message of salvation by grace through faith.

Both Moody and Overholtzer understood the importance of reaching young people with the gospel. Each man’s work with children was certainly a defining aspect of his ministry, but their bond is more foundational. At different times and through different circumstances, both Moody and Overholtzer acknowledged their own weaknesses and cast themselves fully on the grace of God. They understood that both receiving the gift of salvation and serving the Lord require humble faith. In unique ways, their lives displayed God’s power to accomplish His purposes through those who have submitted themselves to Him in faith.