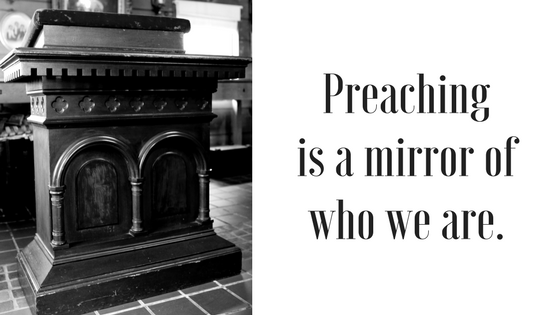 This post is written by guest author Daniel Sheard. Sheard is a graduate of Dallas Theological Seminary and has his Ph.D. in Preaching from Spurgeon’s College, London. He is a superintendent of a K-12 Christian school in Elizabethtown, PA and also teaches theology for Liberty University’s Rawlings School of Divinity. Sheard writes, “I fell in love with Moody about 25 years ago when I pulled Moody’s biography off a bookshelf in a summer cabin. I realized that a passionate focus on the Savior is more important than education and that a Spirit-ignited man burns with a fire that melts his own foibles in a way where God forges him for some kind of kingdom usefulness.”

People who analyze preaching have stylistically figured Moody out. It is not hard to do. However, if you want to preach like Moody, you must be like Moody; this is quite a bit more difficult.

If you were told that Moody preached in short sentences with staccato logic, and then you got behind the pulpit and tried to do the same thing, chances are you might have some success but would probably be disappointed with the results.

If you strung illustrations together one after the other with real-life scenarios of crisis and death, you would, in a sense, be preaching like Moody, who loved to illustrate from the common folk he knew. Yet, it is likely that you would not see a crowd come running to hear you.

If you attempted to be evangelistic and give a plea for the Lord Jesus, God would surely reward you, but the pews might not be full and the call to commitment could be disappointing. One potential reason why is that if you compare what we do with who Moody was, they are two different things.

Why is that? Moody lived a value system before he preached.  For example, he went out and found the people, filled the pew, and later rolled his message out to the crowd. He did not wait for them to come. He found them himself. He loved people before he tried to inform them of anything.

Beyond this, if you want to emulate his rhetoric, you will need to speak in grammatically incorrect sentences and emotion-laden enthusiasm, maybe even with less Bible knowledge than you have. This will probably not help attendance.

Sometimes we wrongly conceptualize Moody-the-preacher as a great orator, when actually what ‘made Moody’ was the fact that he was a great man, a great man of God. Any mediocre preacher can do contextual delivery.  Not many can fixate on the common details of the child, the widow, the laborer, and work the point in passionate love for people until truth drives the crux of the story home, like medicine to a broken individual. This is authentic engagement.

If you want to preach like Moody you also must be completely and totally enthusiastic about the Savior.  That is impossible to fake.  When Moody told Henry Varley he intended to be a wholly consecrated man, he meant it. It was not chatter. It was dead-serious, show-stopping resolve to follow Jesus.

Preaching is a mirror of who we are; it is not a discipline we learn to do. Rhetoric, language, and the manipulation of words are indicative of the state of our hearts. Moody’s power did not reside in oratory, but in the Spirit of the orator and the spirit of access granted to him by God because his heart was purely interested in the reconciling of men to the Lord Jesus. I’ve listened to many enthusiastic young preachers, but few packed a church.  Enthusiasm will go a long way, but to be filled with love AND enthusiasm, that’s another story.

In my own life, I have tried to be fearless and plead with the people, but many times realized that love and spontaneous joy were absent from my preaching.  People felt corrected, not healed.  They did not want to come to my God because what they saw in me was not worth the price of getting up and walking to the front. The positive energy of a joyful, Spirit-filled life is not something we engineer in the pastor’s study, at least not usually. Those qualities are innate, they are indicative of who we are as preachers.

If I want to preach like Moody, I need to be like Moody. Fearless joy in front of wayward street-children who need a glimpse of hope is not what I do from day-to-day. But it should be. Can I carry a similar broken heart for a soldier, maimed by the consequences of battle as Moody did during the Civil War? These types of values are not learned in books or mimicked by listening to videos.

Moody was broken by the empty pews. He said to himself that by God’s grace, he would fill the vacant seat. He would think. “those chairs should not be empty,” and in fact, he filled them before he was the teacher or the preacher. He loved people. He loved to see a crowd gathered together around Christ, shedding their sins. If there was ever a preacher who was interested in bringing salvation and happiness to the Lord’s church, it was Moody. He was not on an ego trip. He worked to see the collective joy. He even crossed theological borders to do that.

Sure, many of us would want to preach like Moody if we could, thriving with a responsive crowd and electrifying immediacy. Yet, those results don’t come without the Spirit of God and the displacement of inappropriate personal values, of ego, of personal gain, and of protection.

When we advance and make decisions for the glory of God and for the good of others, and abide in the wonderment of Christ’s awesome joy, when we open our mouths, then we will preach like Moody. God will give us the words, the venues, the compassionate love that heals the heart of a broken world. Then we will be preaching like Moody.