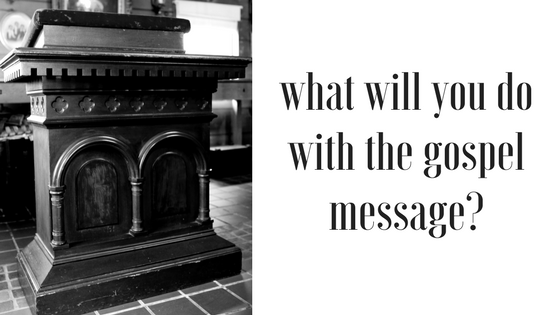 Sheard is a graduate of Dallas Theological Seminary and has his Ph.D. in Preaching from Spurgeon’s College, London. He is a superintendent of a K-12 Christian school in Elizabethtown, PA and also teaches theology for Liberty University’s Rawlings School of Divinity. Sheard writes, “I fell in love with Moody about 25 years ago when I pulled Moody’s biography off a bookshelf in a summer cabin. I realized that a passionate focus on the Savior is more important than education and that a Spirit-ignited man burns with a fire that melts his own foibles in a way where God forges him for some kind of kingdom usefulness.”

In one of Moody’s preaching campaigns in London in the 1880s, a large crowd of atheists intentionally packed the hall to disrupt the meeting. Moody preached on Deuteronomy 32:31, “For their rock is not as our Rock, even our enemies themselves being judges.”

He preached that even enemies of the gospel see the truth about a mighty God and cannot deny it. Upon reaching the conclusions of his sermon, he appealed to the will of the audience. He first gave people the freedom to leave if they wanted no part of his message.

When no one left, he asked the crowd to affirm their desire to trust Christ right then and there.

Moody then with tears and boldness asked anyone who desired to follow the man who advanced his refusal to stand and join the naysayer. When no one moved, he appealed for everyone who wanted to publicly trust Christ and exercise their will to affirm their trust in the Savior despite the hostile crowd, 500 formerly resistant men stood to their feet, saying, “I will. I will.”

It is hard to love people so much that you expect them to decide to go where they themselves have never been, even if they verbalize their reluctance or resistance. In America, we usually respect people’s autonomy too much to do this.

The history of ideas tells us that letting people have freedom to pave their own way is called ‘pioneering individualism.’ It is what makes America America.

Moody’s drive was to advance God’s agenda of the future, even if it meant helping people decide for Christ against their own will. After all, aren’t we all sinners at heart like the Prodigal Son, running from a loving Father? Paul, who himself came to Christ kicking against the compelling love of God, said, “There is none that seeks after God” (Romans 3:11).

To drive this point along, I would ask this: who, in fact, has the right to be the master of his or her own destiny? If God has designs on every person, why not compel them with all our might to face that reality?

Moody understood his role in God’s argument. If God has designs on my audience, it is my responsibility to make them choose or refuse to capitulate to those designs.

Even if I don’t know what God will do with someone’s future, I have a compelling obligation to present a crucified and risen Christ to that individual. S/he is bought with a price, and one’s life is not one’s own. It is time to glorify God and let go of personal agendas.
The whole idea of compelling people to consider the cross cuts across individual rights. This interjection of God’s design on a man or woman is what compelled Moody.

We think wrongly that driving for a verdict is what lawyers do, not preachers. Disrespecting human self-will appears to violate something fundamental in man. Forcing a decision is for courtrooms, not real life. At least this is what we tend to tell ourselves.

Unfortunately, life has some pretty harsh reminders that human self-perpetuation has its brutal limits. Moody worked God’s built-in reminders of the transience of life and the inevitability of judgment.

It may seem strange to you that one of Moody’s favorite topics was death, but the marching footfalls of a coming decease appear throughout his sermons. Of course, the civil war and average life-expectancy helped remind people of the reality that all men will end their road here on earth.

Moody loved to employ hardship and end-of-life scenarios to compel people to consider ultimate questions. However, it was not just that. He forced the inevitable question that begged and demanded an answer: “So, what will you do with what I have just told you. Right here. Right now. What will you do?”

Once a man had considered the idea of Jesus, he should have to decide on the consequences. Delaying a response implied a denial of the message itself–that God has loving designs on us that demand immediate attention.

If truth is the truth and eternal joy lies in deciding for the Savior, why put it off until tomorrow.

Here is an example of what I mean. If we are going out to dine out and I know a great restaurant, why would I leave you at home? Come with me, right here, right now. Your bill is paid in advance. I am telling you that. You have two options: you can accept or reject my offer.

Where are the preachers who love others enough to compel the crowd to choose against their propensities for hell? It is not intrusion or disregard for their autonomy, something they don’t have anyway. It is the only thing that will preserve them.

People need a compelling reason to abandon a life of lostness. The picture must be beautiful, persuasive, and yes, intrusive. If I really care, why wouldn’t I exert my last ounce of energy to drag a thirsty man to a real oasis? He is going to die otherwise.

If he drinks from the living well of Jesus Christ together with me, the hallucinations and false realities that he was chasing are gone. He has found what will save him, or better, he has found the One who will save him.

A complete narrative of this event is found in the Introduction to Wilbur M. Smith’s book, The Best of D. L. Moody: Sixteen Sermons by the Great Evangelist (Chicago: Moody Press, 1971), 21-23.