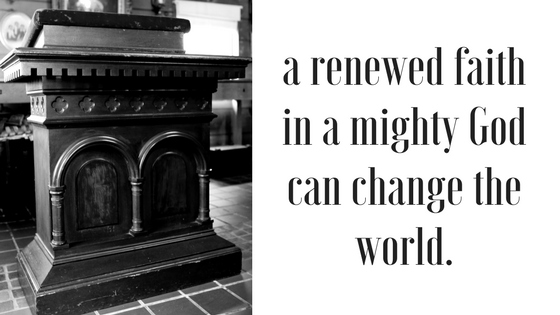 Faith is very much like optimism: both require a positive, forward-thinking expectation. Moody was a man who always seemed to be filled with a certainty and hope about what was about to happen. Why was this? How could a man know that God was at work in such a powerful way?

The answer is quite clear. He understood his God. He understood the redemptive power of the Savior and knew Him to be a God who would do what He does. He expected God to act according to His character.

The attitude with which we speak to others reveals our theology, what we believe about the God we say we profess. If we believe that God is a saving God, we expect Him to act according to His attributes. We expect Him to redeem mankind, love the audience, and deliver from sin.

Faith and optimism bring growth, passion, and anticipation. When Moody preached, he genuinely expected God to do what He loves to do, save sinners from their miserable life. Moody lived by that “unquenchable optimism” that Ray Stedman speaks about in Authentic Christianity. “Now thanks be to God who always leads us in triumph in Christ.” 2 Cor 2:14.

“Always” is a tough word. It cuts across our pessimism, our doubts, our bad theology. God is a saving God, not a critical miser. No matter what our circumstances, God is already ahead of us building bridges across our impassable rivers.

If we do not have that expectation, our audience never will. I once heard it said that if there is a mist in the pulpit, there is a fog in the pew. A crack in the armor of optimism, is flat-out doubt. It will kill our preaching like a dead opossum on the side of the road. It’s going nowhere.

Faith not only casts light on dark people; it also casts light on circumstantial obstacles. The sheer will to move forward despite civil war, a poor education, financial scarcity to erect and sustain schools without adequate funds (the Northfield schools, Moody Bible Institute), the Chicago fire that burned his church to the ground, and family struggles, does not come from the will within. It comes from faith in a God who is quite a bit bigger than bleak conditions.

Where does that sustained motivation come from that drives a man and causes him to preach to more than 100,000,000 people, minister in slums, start schools, and travel back and forth across the Atlantic? One has to say that the motivation comes from the positive anticipation of seeing what God is about to do.

We are so often satisfied with what we have done. We become enamored with the small incremental response and growth of yesterday. Sometimes our small successes supplant the mega-optimism of divinely-ordained power to make a difference today and tomorrow.

A hope in a faithful God

In 1871 when the Chicago Fire crushed the physical surroundings of Moody’s ministry in that city, he went to New York to raise money to rebuild. However, he was personally miserable because he lacked the anointed power of God. Sure, he had started schools and preached to thousands. However, the peace and power of God were missing. It fell on him in a small upper room of a friend while Moody was on his knees before the God who gave him unquenchable expectation. This renewed faith in a mighty God was about to change the world.

From that moment forward, Moody the preacher was never the same. His ministry and power in the pulpit grew exponentially. He shed doing ministry for himself and began preaching for Christ. Not only did the numbers go up, but the work exploded in other amazing ways.

So where does that leave us preachers? What does the life of Moody teach us about forward-thinking optimism in a God who has great plans? Our job as expository preachers is not just to explain the text. Any Pharisee can do that.
Our task in proclamation is to believe ahead of time that when we explain the text in such a way as to demonstrate the powerful and mighty love of God, we will surely connect people to the vibrant passion of the Christ who is right now pursuing them with death-crushing love. They will respond. They will start to get a glimpse of the amazing God we already know.