Longing for home: D.L. Moody on getting to where we belong 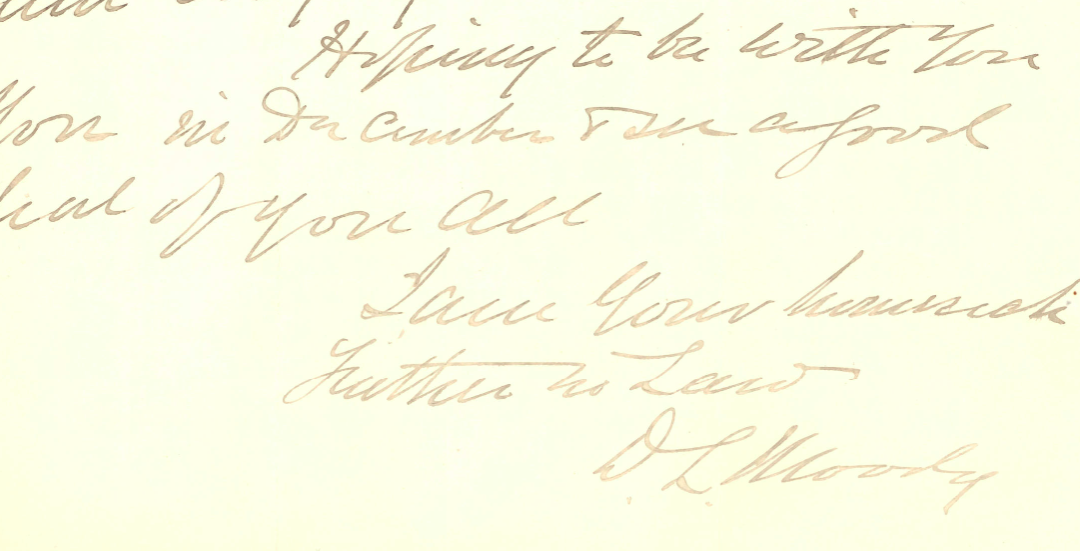 When we reflect on 2020, the dwindling of travel and traffic and the renewed emphasis on the home environment may be one of our most enduring shared memories. For many of us, the need to consolidate our work, study, family activities, and worship into a domestic routine has been deeply challenging but also a welcome opportunity to simplify and re-center our lives around the people and activities that matter the most. The relative stillness of the pandemic offers a sharp contrast to the mobility and frenzied schedules of the preceding years.

The tension between “home” and “movement” is one that Dwight L. Moody understood very well. The call of “home” to those far away is a powerful theme in his writings. Living in the early age of railroads and ocean liners, he knew more of the Atlantic world and the North American continent than almost anyone and had personal experience with many of its wonders and problems. Yet, his letters to family are full of longing for the people, sights, smells, and landscape of Northfield. They often stated that he was “real homesick” or even closed with “I am homesick,” and asked for any details about life on the homestead that could be remembered. When Dwight was abroad, his brother George and nephew Ambert were pressed for “a good farm letter” with news about the family’s animals, crops, buildings, and property.

If we browse subject headings in the digital archives, we find dozens of items with tags like “homesickness,” “family life,” “family farm animals,” and “homestead.” Having left the homestead at age 17 to seek his ambition in larger cities, Dwight carried a longing for the quiet and the deep, human connections of Northfield throughout his life. This began early. He wrote movingly of a family reunited in one letter to his mother from Chicago:

“Mother do not think for one moment that I do not love you now as well as I did the first day I left home I love to think of home & am anticipating such a good time next summer when I come tell the boys I do not forget them … I pray for you all and my prayer is to my father in heaven that we may all meet in Heaven Oh for a united family in heaven.  I must close now but Mother pray for your absent son far away from the counsels of a Mother.”

For the young Moody, “Northfield” summoned an environment of warm memories, love, support, and unity that he had left behind. Reunion with home and family brought echoes of ultimate fulfillment in eternity with Christ.

As a historian, I see in this language one of the great stories of the 19th century — and a paradox. The world became more transitory as young men left the countryside to seek their fortune, or just work, in cities. But mobility produced a need for authentic human connection and roots. Absence from home created a longing for home — or something that could replace home, removed from families, traditions, and natural relationships. Moody nurtured such a strong love of home and family that he returned to Northfield in 1875 and treasured it as a base for the rest of his life.

Yet as I spend more time with Moody’s writings, I am convinced that “home” was a topic of deep theological and personal reflection for him. Recall that Moody’s early work in Chicago was joined to the Y.M.C.A, which mobilized to address the communal and spiritual needs of young, single men as the city was flooded with them. Their story was his story, and he served as the Association’s Librarian and City Missionary before becoming President in 1867. While he established the famous Sunday Schools, his greater responsibility was to evangelize and disciple youths who, like him, had left their mothers and were now confronted with a new spectrum of moral and social choices. His war service with the U.S. Christian Commission, when he preached to Union soldiers at the front and Confederate prisoners at Camp Douglas in Chicago, underscored these experiences.

This left an imprint on his sermons and his unpublished sermon notes, which we are now preparing for the digital archives. The home as a place of reconciliation and restoration appears in many sermons, sometimes as a theme, more often as a point of application, and often scribbled in the margins as an optional anecdote. “The Home,” he insisted in Bring Him Unto Me, was “more important than church or state,” or even “a minister or Sunday School teacher.” Moody directed these thoughts toward urban parents, urging them to see the home as a place to develop in their children temperance, affection for others, and a gracious view of God. One should never use Bible-reading or memorization for discipline, he insisted, because this would “teach them deception” before God, and finally drive them “away to the police.”(1)

A sermon titled Absalom cuts deeper. It explores the character and “downward path” of its subject to address wayward young men who, like David’s favored son, had “cast off their father’s God” and chosen temptation and bad companions. Absalom’s embrace of “pride, revenge, ingratitude, lack of mercy, and natural affection” had broken the heart of the father who had “expect[ed] to see him on the throne.” For his audience, Moody the Victorian linked the pain of David to that of distant, praying mothers, who wished to know “Is it well with my child?” Moody’s call was to settle with God and then to write home: “This is one of the most important Sabbaths of your life. Take a look into the old Home. Will you make their hearts sing for joy? You will write your first letter home today.”  The need to reconcile with home was connected powerfully to the need to reconcile with God:

“The first grate event in a young man’s life is when he leaves home for the first time most men & women have to do it/ Young man are you goin to let any sad tidings go home to saden the hearts of the loved ones – if your not right with God it is not well & it is not goin to be well.” (2)

I hope we do not press too hard into Moody’s thinking to say that loving acceptance of home was essential to the health of the soul. If young men could make peace with a gracious and demanding home, they could probably understand something about heaven and the inclination of the soul to God. Home was part of a flourishing life and a proper expectation of heaven, both of which he experienced himself at Northfield.

Shortly after D.L. Moody’s passing, his recently widowed wife, Emma, captured this beautifully in a letter to Jane MacKinnon: “When I think of his homesickness of Heaven I like to remember too that the morning that he went he said Earth has been good to me & life has been very sweet but it is so much better to go!”

DANIEL J. KOEHLER, PhD is Associate Dean of the College for Academic Affairs at the University of Chicago and Editor of the D.L. Moody Digital Archives.  A historian of modern Europe and the modern Church, he explored Moody’s reception in continental Europe in his Ph.D. dissertation (University of Chicago, 2010), and has been involved in archiving and editing Moody’s works since 2012.