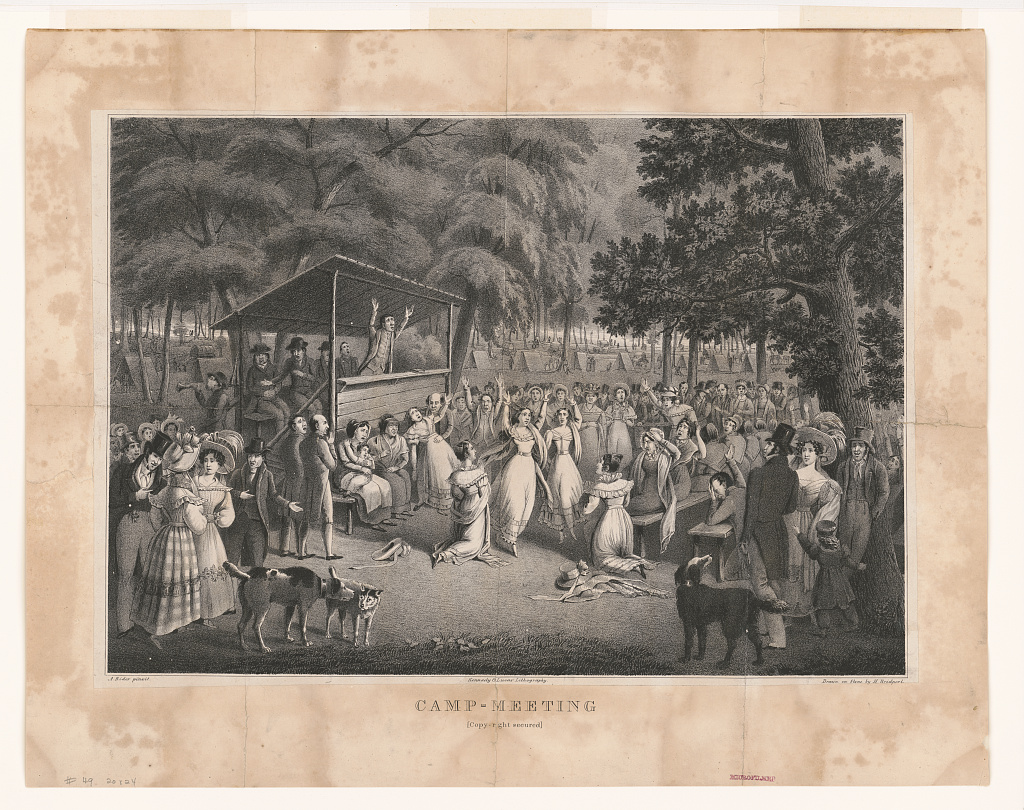 The early history of New England is characterized by several distinct periods of renewed religious fervor. Dwight L. Moody, himself from the Massachusetts countryside, is one in a line of evangelists and preachers who are still remembered for their important roles in the revival and mission movements. Moody is not generally placed within a specific revival period, but his approach to evangelism and widespread success are reminiscent of periods such as the Great Awakening. Like those before him, Moody was an evangelistic innovator who left a unique imprint on the history of Christianity in New England and the entire country.

In the First Great Awakening during the 1740s, Massachusetts native Jonathan Edwards became known for his intense sermons, exemplified in a famous message he gave in Enfield, Connecticut, titled “Sinners in the Hands of an Angry God.” His work inspired George Whitefield, a minister from Great Britain who helped pioneer the itinerant preaching that was a common element of the First Great Awakening and subsequent revival movements. Whitefield came to America, starting in New England, and convicted and compelled audiences throughout the colonies.

The Second Great Awakening continued the pattern of the first, its preachers reaching thousands of eager listeners with the gospel message and inspiring widespread religious zeal in massive evangelistic gatherings known as camp meetings. The Haystack Prayer Meeting occurred shortly after the Second Great Awakening in August of 1806. While meeting in a field outside Northampton, Massachusetts, five young college students were forced to take shelter behind a haystack when a storm caught them unawares. In its shelter they continued to pray and discuss the missionary cause in South Asia. This informal meeting ultimately culminated in the birth of the American Board of Commissioners for Foreign Missions.

Whitefield and his contemporaries inhabited the sphere between preacher and scholar: most were educated and astute theologians, but they are more often remembered for their dramatic, energized preaching. Not confined to studies and university halls, they traveled from town to town with a powerful and convicting message of salvation for ordinary people. This same burden for the Gospel brought together the five young students at the Haystack Prayer Meeting, and later it would drive a young D.L. Moody to leave business and devote himself to serving God through evangelism. These individuals were the spark that ignited the flame of renewed religious zeal among the people.

Following in their footsteps

The revival-meeting model served as a forerunner of Moody’s evangelistic meetings in the late 1800s. In New England, throughout the United States, and across the Atlantic in Great Britain, large audiences clamored to hear Moody speak. Ira Sankey, a musician and gospel singer, traveled with Moody for much of his ministry, leading hymns and music during the meetings. Moody’s son William R. Moody summarized his father’s approach: “From the time he came before his great audiences to the moment when he rose to preach he kept the entire body absorbingly occupied with something interesting.”[1] Moody was no entertainer, but he was not opposed to using music and vivid illustrations to hold the attention of his audience.

D.L. Moody was first and foremost an evangelist. But unlike Edwards and Whitefield, Moody was never formally educated beyond the fifth grade. He is not known for his theology so much as he is remembered for his simple yet powerful presentation of the gospel. Unlike the revivalists who some criticized as radical, Moody preached with a clarity and conviction that connected him to his audiences. His son writes, “In sheer persuasiveness Mr. Moody has few equals, and, rugged as his preaching may seem to some, there are in it pathos of a quality which few orators have ever reached, and an appealing tenderness which not only redeems but raises it, not unseldom, almost to sublimity.”[2] Moody had no training in rhetoric or preaching, but he never doubted the power of the message he carried. He is quoted saying, “If you want to get hold of an audience, aim at the heart; and there is nothing that will warm up the heart like the Gospel of Jesus Christ.”

The schools that Moody founded in New England testify to the unique legacy of his ministry in this part of the country. In addition to seeing people place faith in Jesus, Moody desired to prepare and equip individuals to continue the important work of evangelism and discipleship. The Northfield Seminary for Women, Mount Hermon Boy’s School, and numerous student conferences held in Northfield fulfilled Moody’s vision of providing a distinctly Christian education to those who couldn’t afford expensive private schools.

The Holy Spirit worked mightily in D.L. Moody through the simplicity of his message and the sincerity of his heart. The transformation that comes from the Bible’s message of salvation motivated him above all else. J. Wilbur Chapman quotes Moody: “If they can only get back to the Word of God, then we will have not just here and there a revival, but we will be in a revival all the time . . . It is those Christians that are feeding on the Word of God that are revived all the while.”[3] Moody recognized that his town, his country, and the world were ripe for spiritual harvest. In the spirit of the revivals before him, D.L. Moody exemplified an enthusiasm for the gospel that continues to challenge believers.

Image credit: US Library of Congress