The Evangelist, His Chauffeur, and the Side Stop That Changed Everything 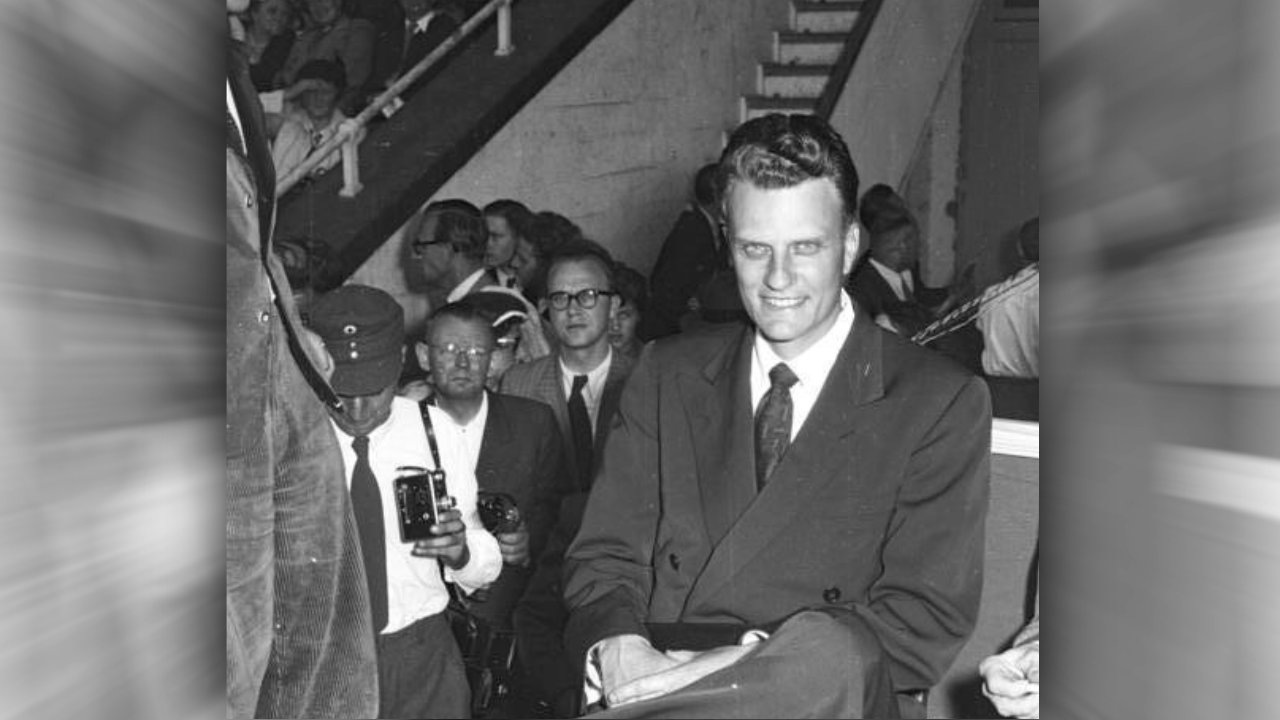 On New Year’s Eve 1949, a fiery, young southern evangelist named Billy Graham was invited to the Boston area to speak at Park Street Church as the congregation brought in the New Year. The evening’s event would also serve as the kickoff for a weeklong crusade at the church. At the time, Graham was fresh off a West Coast crusade that had caught the attention of almost as many media skeptics as it had hearts for Jesus. Upon hearing about Graham’s upcoming visit to New England on what many view as the biggest celebration of the year, the Boston Herald ran the headline “Evangelist Here to Vie with New Year’s Fun.”

Though the local media may have been scoffing at the idea of an evangelist in the historic city on New Year’s Eve, God had even bigger plans than the staff at Park Street Church who had invited the young preacher. With 6,000 in attendance on New Year’s Eve, the crowd didn’t stop coming after the ball dropped. Hundreds were turned away that night at Park Street Church, leading Graham to come back every night for two and a half weeks, culminating on January 17 when Graham shared the gospel to a capacity crowd of 16,000 in the iconic Boston Garden.

Sadly, the Graham team knew they had to eventually leave New England, but immediately a committee formed to work on bringing them back just a couple of months later. On March 27, 1950, Billy Graham would return to New England to begin twenty days of crusades in fifteen cities all over the region.

Gordon College senior Alan Johnson knew immediately he wanted to not only be in Graham’s audience during his return to New England, but also be a part of the team bringing him in and working with him during his time there. Like many others, Johnson recognized that God was doing something big in New England in 1950, and he was willing to serve however he could just to be even a small part of it.

“Through my connections with Youth for Christ, I was asked to be a part of the committee,” Johnson said seven decades after the event, as he recalled in detail many parts of what he viewed then, and even still today, as a special once-in-a-lifetime opportunity he would not have missed for the world.

And how was he asked to help during Graham’s visit to the area? As Billy Graham’s personal chauffeur. “I’ll never forget it,” he shared as he thought back to his time driving the young Graham around New England.

In 1 Corinthians 12, the apostle lists out many spiritual gifts, saying that to some God gave the gift of wisdom, of teaching, of faith by the spirit, and many others. Later Paul also instructs the church at Colossae that no matter what their gift or the work they do, “work heartily, as for the Lord.” Alan Johnson would be the first to tell you that he was never gifted in the same ways as Billy Graham was, but when given the opportunity to work as his chauffeur, he knew he would “work heartily, as for the Lord.” And as a result, perhaps nothing in New England would ever be the same again.

“For Such a Time as This”

Alan Johnson had grown up in nearby Springfield, Massachusetts, and as a child had accompanied his father multiple times to the Northfield homestead of nineteenth-century evangelist D. L. Moody. During these invaluable father-son trips to breathe in the beauty of the Berkshires, he also learned all about Moody—born, raised, and buried on the historic property that now serves as a museum so that people like Johnson and others can learn about the famed pastor and school founder.

Fast-forward to his senior year at Gordon College, given the opportunity to drive around the headline-grabbing twentieth-century evangelist Graham, the not-too-shy chauffeur had an idea for what he thought to be the perfect stop one afternoon before the evening’s crusade event. What about a visit to the Moody homestead?

Though D.L. Moody had passed twenty years before Billy Graham was even born, the New England and Chicago area evangelist was one of Graham’s heroes, and he jumped at the opportunity to visit the birthplace and final resting spot of Moody’s that Johnson had become so familiar with over the years and that had made such an impact on his own life.

In the book of Esther, when Mordecai discovers Haman’s plot against the Jews, he goes to his cousin, the newly appointed queen Esther, to ask for her help. “Who knows,” he wonders aloud with her, “whether you have come to the kingdom for such a time as this?” (Esther 4:14).

In the seventy years since taking Graham to the Moody gravesite, it would be understandable if Alan Johnson had asked himself something similar. Had he grown up visiting the Moody homestead and gaining a love and appreciation for the evangelist for such a time as this? Because what happened at the gravesite that day impacted his life forever, and perhaps became the launching pad for the many decades to come that Graham would spend traveling from town to town, and country to country, sharing the good news of Jesus Christ.

Upon arriving at the spiritual retreat of the giant on whose shoulders he now stood, Graham and company had piqued the interest of local onlookers who were beginning to gather to find out why the Moody homestead had suddenly gathered so much traffic that afternoon. (Graham’s car, driven by Johnson, wasn’t the only car for the team. He had a multi-car retinue escorted by state troopers as he traveled from town to town.)

As Johnson put it, “A handful of girls from the Northfield schools had come out to see what all the commotion was.” Sadly, the administration at the all-female Northfield school (a school D.L. Moody had founded) had ignored Billy’s return to the area, so these girls had not been aware of the crusade events Graham was holding in town.

Later on that afternoon Graham shared with Johnson his regret for not seizing the opportunity to invite the Northfield girls to that evening’s event. Barely holding back tears, even all these decades later, Johnson is still moved by Graham’s heart for every individual to hear and respond to the gospel he traveled the world to share. “I should have offered an invitation to those girls,” Graham admitted to Johnson regretfully. “I had a chance to preach to them.”

But then Johnson’s eyes lit up as he shared the rest of the story. “That evening, in Springfield, I saw in the audience a bunch of girls coming from Northfield . . . He did have an impact, in spite of the fact he was ignored.”

And perhaps the largest impact was still to come that day at Moody’s homestead. For after a brief time inside with Moody’s daughter-in-law, Billy Graham and team—the young chauffeur included—headed to Moody’s gravesite. As though it had happened only yesterday, Johnson recalled, “When we got to the Moody gravesite, Billy Graham dropped to his knees—and I can visualize it today. He was down on one knee, he found where Moody’s grave was, and there he committed his crusade, and also what he was doing, and New England for the Lord.”

The entire gravesite visit couldn’t have lasted more than a few minutes, but the Lord of time doesn’t need hours to change the world, only a willing heart. And over the next three weeks, God used Billy Graham’s willing heart to impact tens of thousands of lives in the region. Receiving even more invitations from universities in the area, on top of his already scheduled visits, Graham traveled to all he could fit in, never even considering changing his gospel message to better fit the liberal academics who were hearing this country boy preacher for the very first time.

Finally, on April 24, 1950, almost four months after his media-mocked New Year’s Eve visit, Billy Graham preached the gospel at Boston Common to a crowd of 40,000, more than even the total capacity of nearby Fenway Park, home of the Boston Red Sox.

When Billy Graham died in February 2018, a well-known quote of Graham’s circulated the Internet: “Someday you will read or hear that Billy Graham is dead. Don’t you believe a word of it. I shall be more alive than I am now. I will just have changed my address. I will have gone into the presence of God.”

In the days following Graham’s departure to heaven, this remark of his was pointedly relative and encouraging to the rest of the world that was celebrating his life on earth and the impact it had for the kingdom of God. But did you know that Graham actually adapted this saying from D. L. Moody’s autobiography, released in 1900?

In the book’s opening line, Moody wrote, “Some day you will read in the papers that D. L. Moody, of East Northfield, is dead. Don’t you believe a word of it! At that moment I shall be more alive than I am now. I shall have gone up higher, that is all; out of this clay tenement into a house that is immortal—a body that death cannot touch; that sin cannot taint; a body fashioned like unto His glorious body.”

At Moody’s gravesite that day during the spring of 1950, with his chauffeur Alan Johnson by his side, could Graham have been remembering Moody’s words as he stared at what the world would see as proof that Moody was dead? Could he have been picturing Moody “more alive” than even the young, energetic Graham was in that moment?

Could that have been part of what drove him to fall down to his knees at the gravesite and dedicate his New England crusade to God, eventually preaching to a crowd of 40,000 souls who would all one day have their own gravestone markers announcing their deaths?

Who can truly know all that God was doing in Graham’s heart that spring day in 1950? Some things are to be known only between one soul and his Creator. But we do know God used a young chauffeur who “worked heartily, as for the Lord,” to help do His work that day that impacted more than a lone evangelist, but all of New England.

Alan Johnson had merely suggested a visit to Northampton, but God had so much more in mind.