The significance of Northfield, Massachusetts 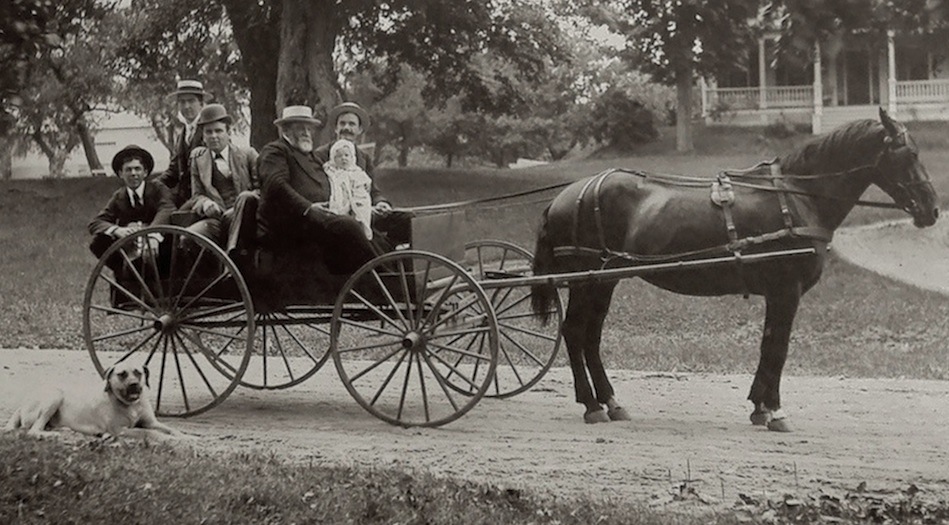 Pictured: D.L. Moody in his carriage in Northfield, MA

D.L. Moody was a well-traveled man. His evangelistic efforts took him to cities and states throughout North America and on journeys across the Atlantic to Great Britain and Europe. Moody’s extensive travel is even more impressive when one considers that he lived before travel by air or car became prevalent. But no matter where his ministry and evangelistic efforts took him, Moody’s heart never strayed far from his beloved home in Northfield, Massachusetts.

“Some instinct drew him back to the soil, some mysterious prompting impelled him to solitude, away from the crowds that absorbed so much of his strength.”[1]

The foundation of Moody’s birthplace is in that Northfield soil. There he purchased a home after returning from his first journey to Great Britain, and his hopes for establishing a Christian school were first realized in the founding of the Northfield Seminary for Young Women. Near his birthplace is a short hill called Round Top, a place beloved by Moody and often a venue for his preaching. This hill now marks the spot where he and his wife are buried.

After extended periods of travel, preaching, and working, Moody often returned to Northfield, relishing the rest and rejuvenation offered by the familiarity and pastoral beauty of his home. William Moody notes,

“For several summers he retreated to the quiet seclusion of this country home, where he could study and prepare for the arduous missions during the winter months.”[2]

Moody understood that the property at Northfield was more than a point on the map. Its quiet beauty offered spiritual and physical refreshment to many who passed through over his lifetime. It held Moody’s memories of childhood and in his later years served as a center for preaching and ministry. Northfield was dear to Moody, and Moody Center recognizes that it is the ideal location for the work of continuing the legacy and vision of this evangelist.

In 2017, twelve years after the Northfield and Mount Hermon schools consolidated to Mount Hermon’s campus, a quarter of the old Northfield campus was given for the creation of Moody Center. A substantial amount of the center’s work is preservation. Moody’s birthplace and homestead still stand on the grounds, as well as other historic places like the auditorium and Witness Grove. In addition, the center has assembled an archive of hundreds of letters, sermons, and writings by Moody and making them available online, allowing a new generation to glimpse the man behind them.

While Northfield proved to be the ideal place for Moody to rest and study, even there he was never found idle. Moody was above all a man preoccupied with serving God and doing His will. In addition to preservation, an important part of honoring that legacy is continuing the work that Moody started. The Northfield property certainly has historic value, but it continues to offer a unique space of rest, reflection, and spiritual preparation for visitors today.

Moody’s primary goal was the spread of the good news of salvation in Jesus Christ, and the Moody Center recognizes the central role that the gospel must play in the work of preserving his legacy and serving the church. The story of a simple man from Northfield used powerfully by God presents a unique background from which to communicate the gospel message.

Over Moody’s lifetime, the Northfield property welcomed a host of students and visitors. At times these were informal gatherings in Moody’s own home, but other events such as the Northfield Bible Conferences brought together hundreds of pastors, professors, church leaders, and youth from around the world. Northfield’s tranquility offered the ideal setting for visitors to study God’s Word, listen to the Holy Spirit, and be mutually encouraged.

The qualities that drew men and women to Northfield then are now available to new generations. Today the old auditorium hosts groups seeking to pause their busy routines, and the New England landscape is a sanctuary for visiting pastors and ministers. Tours and prayer walks provide a unique perspective on D.L. Moody’s life as well as an opportunity to meditate and be challenged to listen to the call of God.

Writing about the continuing appeal of the Northfield campus in Theology magazine, James Spencer notes,

“It is a space where God’s word is preached and His gospel proclaimed. It is a place where weary Christian workers come for rest and reflection and where men and women seek out the Holy Spirit. It is a slow, simple, idyllic space where people can move away from the distractions of daily life to engage in the urgently needed activities of prayer and worship.”[3]

Moody Center offers the historic buildings and rolling green hills of northern Massachusetts to all who visit, in the hope that this place which was so dear to Moody will continue to be a catalyst for spiritual transformation.